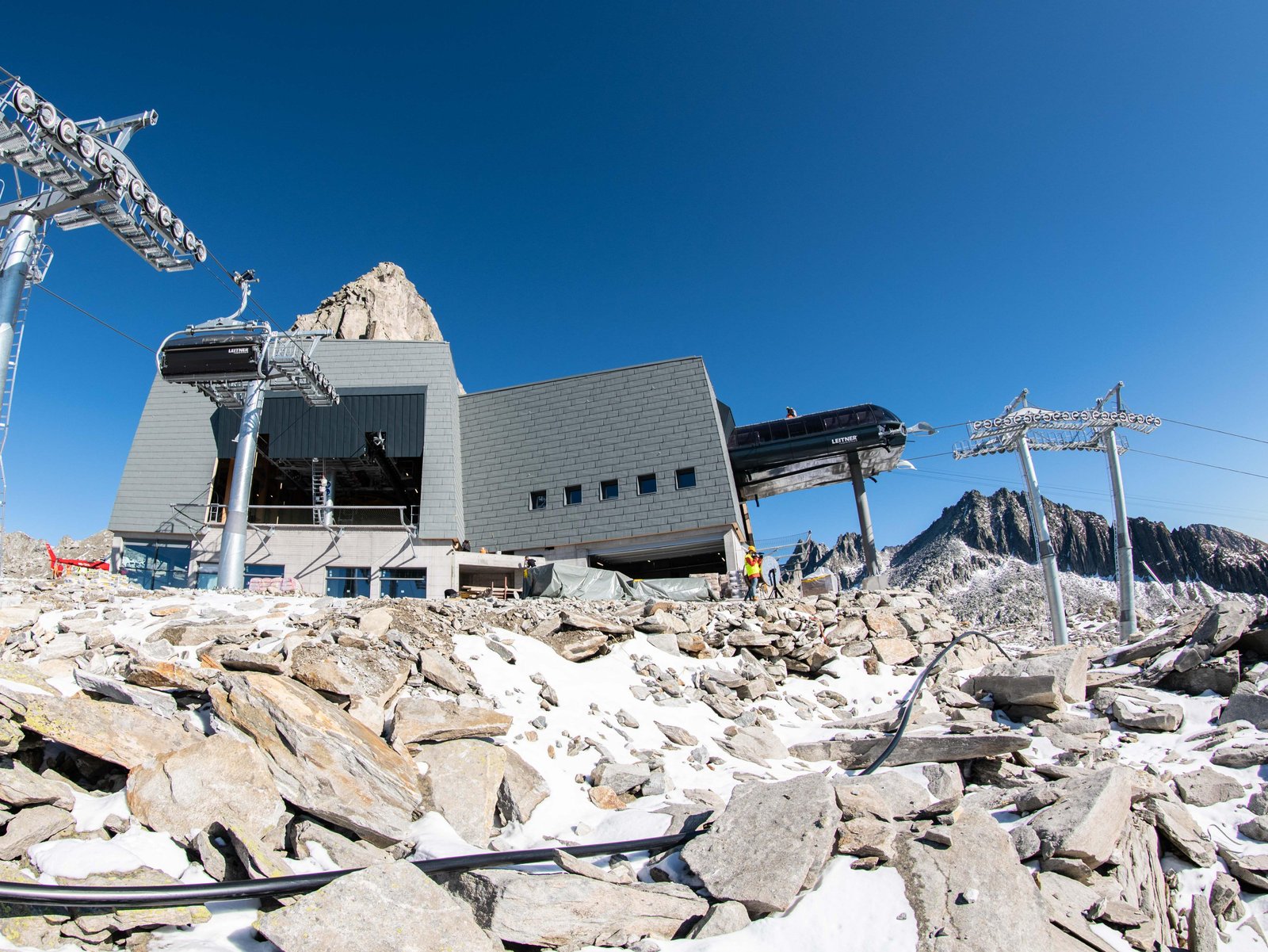 The Andermatt-Sedrun ski link in the SkiArena will be reality for the start of winter season 2018/2019. The last new piste from Oberalppass to the Schneehüenerstock is nearly finished. This completes another major project of the Andermatt Swiss Alps destination – along with the inauguration of the Radisson Blu Hotel and the buildings with shops and restaurants around Piazza Gottardo in Andermatt in December 2018.

The expansion of SkiArena Andermatt-Sedrun into the largest and most modern ski resort in Central Switzerland has been ongoing since 2015. Three new chairlifts and snowmaking for the valley run from the Gemsstock were put into operation already by winter 2016/17. In winter 2017/18 the new gondola cableway from Andermatt train station to the Gütsch (Gütsch-Express) followed, along with the two chairlifts Lutersee-Flyer and Schneehüenerstock-Flyer.

In summer/autumn 2018 the Oberalppass-Schneehüenerstock gondola cableway (SchneehüenerstockExpress) and the associated pistes were built, as well as further pistes in the Gütsch-Schneehüenerstock area and the pump station on Oberalppassstrasse. The latter supplies the approximately 200 snow-making machines in the ski resort with chilled water from Oberalp Lake, thus enabling perfect slope conditions throughout the season all the way to Andermatt. A total of 550,000 m2 of pistes in the SkiArena can now be covered with technical snow.

Around 120 people, over 20 heavy construction machines up to four helicopters were deployed during the brief construction period of summer 2018 in the Gütsch-Schneehüenerstock-Oberalppass area, so that the Andermatt-Sedrun ski link in both directions can definitively be put into operation for winter season 2018/2019. Season start on the Gemsstock is scheduled for 9 November 2018. Season start in the Sedrun/Oberalppass area is scheduled for the end of November, and at Gütsch before Christmas

Schneehüenerstock as central hub with restaurant

With the construction of the last new lift, the Schneehüenerstock-Express, the visionary project of the Andermatt-Sedrun ski area merger will be complete. The Schneehüenerstock, where two lifts converge, forms the actual hub of the ski link. With breath-taking views of the Ursern Valley and Surselva, Schneehüenerstock is destined to become a hotspot. Assuming timely issue of the building permit, a mountain restaurant with 222 indoor seats and 272 outdoor seats will be built.

The “Schneehüenerstock-Express” has only14 masts and can transport 2,400 people per hour into the SkiArena. Thanks to the middle station, “Platte”, the continuous ski link from Andermatt to Sedrun is ensured even when pistes are closed. The valley station to Oberalppass is equipped with escalators and allows easy transfer in both directions.

Project manager Peter Furger draws a positive summary: “We have realised the entire infrastructure while meeting the project targets in terms of schedule and budget. Despite a number of challenges, we can now wrap up the project.” He thanks all the decision-makers within and outside the company, all the involved contractors and suppliers and the employees.

At Gütsch, construction of the eponymous restaurant has already begun. The Restaurant will serve upscale cuisine and is scheduled to open at the end of 2019. At the Gemsstock side at Gurschen there will be a new Glas-Iglubar “Rondodrom”.

Collaboration amongst Andermatt + Sedrun + Disentis In summer 2019, Bergbahnen Disentis AG will open its new link from Sedrun to the Disentis ski area. The ski area connection from Andermatt via Sedrun to Disentis opens up new future possibilities for the two lift companies.

Bergbahnen Disentis have invested about CHF 35 million in the renewal of the gastronomy, snowmaking and cablecar. In December 2018, the Catrina Resort will open with around 108 hostel beds and 140 holiday apartments as well as Spa, Steakhouse, Restaurant, Sportshop and Coop shopping center. With this additional investment of around CHF 65 million, Disentis-Sedrun will be opened to tourism by the Grisons side as well.

More buses in the SkiArena SkiArena Andermatt-Sedrun partners with various bus companies to offer guests a comfortable journey at an economical all-inclusive price. From the 2018/19 season, buses will travel from Lenzburg/Baden, Aarau/Olten, Zurich, Lucerne and Flüelen/Altdorf (with connections to SBB trains) to Andermatt and back. The attractive package for a day of adventure at SkiArena Andermatt-Sedrun costs just 69 francs, including ski pass. For adolescents the price is 55 francs, and for children 39 francs. The buses will run from 1 December 2018 on selected dates. For more information see www.andermatt-ski-express.ch.

Dynamic pricing will be continued The SkiArena introduced flexible pricing for ski tickets in 2017. The earlier one books, the lower the rates: Full-day passes are available in Andermatt-Sedrun from just 39 francs for adults, 26 franks for adolescents and 13 francs for children. The prices change constantly, depending on the season, weekday, weather and booking date. The innovative project is being continued and is being copied by other ski resorts.

On ten weekdays between December and March, day tickets for SkiArena Andermatt-Sedrun and also for the Disentis ski area cost just 10 francs:

The ski season at SkiArena Andermatt-Sedrun lasts seven months: from November to May. This has been made possible by extensive investments in technical snowmaking and snow farming. In order to enable an early season start on Andermatt’s flagship mountain, the Gemsstock, snow is stockpiled on the Gemsstock glacier and St. Anna glacier. Thanks to constant snow farming, around 25,000 m3 of topquality snow can be protected from melting at both locations. Around 10,000 m2 of fleece is used for this purpose at the two locations.

The project for the Andermatt-Sedrun ski area merger, which started in 2015, is expected to cost around CHF 130 million. CHF 82 million is being covered by the SkiArena itself; the canton of Uri provided CHF 5 million and Grisons CHF 3 million as à fonds perdu grants. An additional CHF 40 million was provided in the form of low-interest, repayable NRP federal loans.

Planning for the overall project took six years (2009-2014). The construction projects were reviewed and approved by the Swiss Federal Office of Transport (FOT) in a rolling process. Following a legal objection period, each construction project could commence. This was the first time this two-stage, complex and time-consuming overall approval process was used in Switzerland. Andermatt-Sedrun Sport AG was supported in this by an advisory board in which environmental organisations, federal and cantonal authorities and the Korporation Ursern were represented. This new, integrated process ensures planning reliability for the realisation of the overall concept and enables coordinated action by federal, cantonal and municipal authorities.

With over 120 km of pistes and 22 ski lifts, SkiArena Andermatt-Sedrun is the largest ski area in Central Switzerland. It extends to the nearly 3,000-metre-high Gemsstock and the Schneehüenerstock (2,600 metres a.s.l.) and over the Oberalppass to Sedrun and Disentis, in the canton of Grisons. The winter hiking trails and cross-country ski trails on the valley floor enjoy plenty of sun, thanks to the east-west orientation. Snowshoe hikes, toboggan rides, the ice rinks in Andermatt, Sedrun and Disentis and ice climbing in Göschenen all offer good alternatives to skiing.