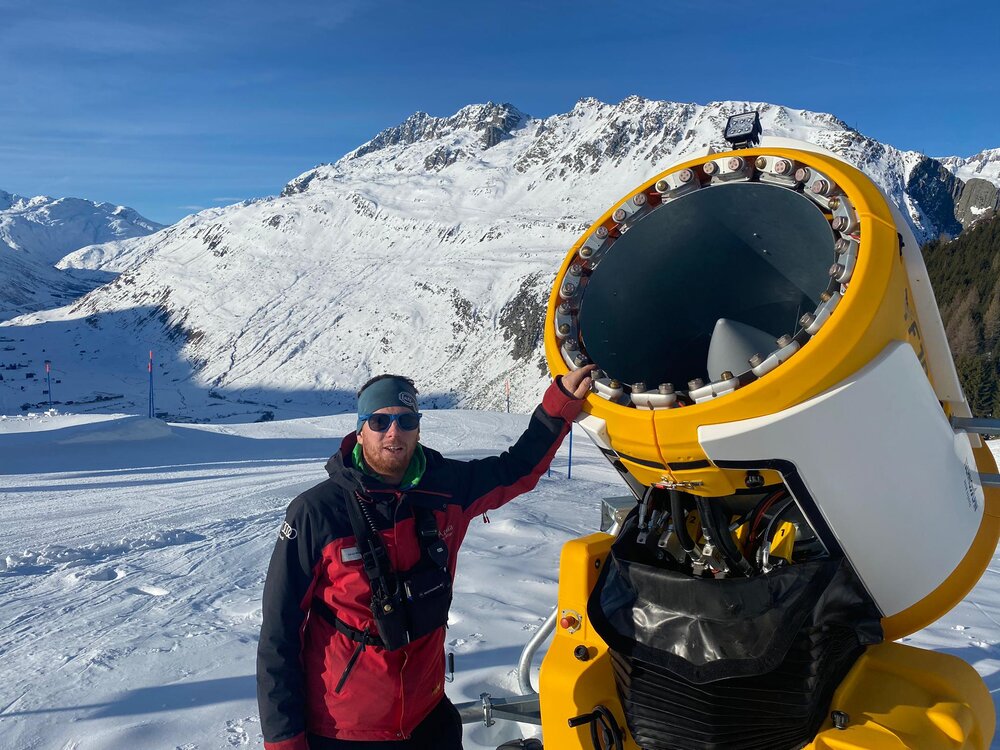 Piste man­ag­er Dani Mey­er: “We know pret­ty pre­cise­ly where we need to pro­duce snow and how much we need.”

Dani Meyer is in charge of the snow cannons at the SkiArena in Andermatt. In an interview, he explains how snow cannons work, how to save energy when making snow, and how he is personally witnessing climate change on the mountain.

Dani Meyer, how is artificial snow actually made?

Dani Meyer: To make snow, you need water, compressed air and electricity. The water is mixed with the compressed air in a nucleator. This creates nuclei that water droplets adhere to as they come out of the nozzles. Due to the casting distance of the propeller-driven snow cannon or the drop height of the snow lance, the water droplets freeze and become snow.

Skiers and snowboarders can tell when they are moving across artificial snow. Why is that?

Meyer: Unlike natural snow, artificial snowflakes are not star-shaped but instead round and much denser because there are more connections. When you move across artificial snow, you have the feeling that it is more compact. 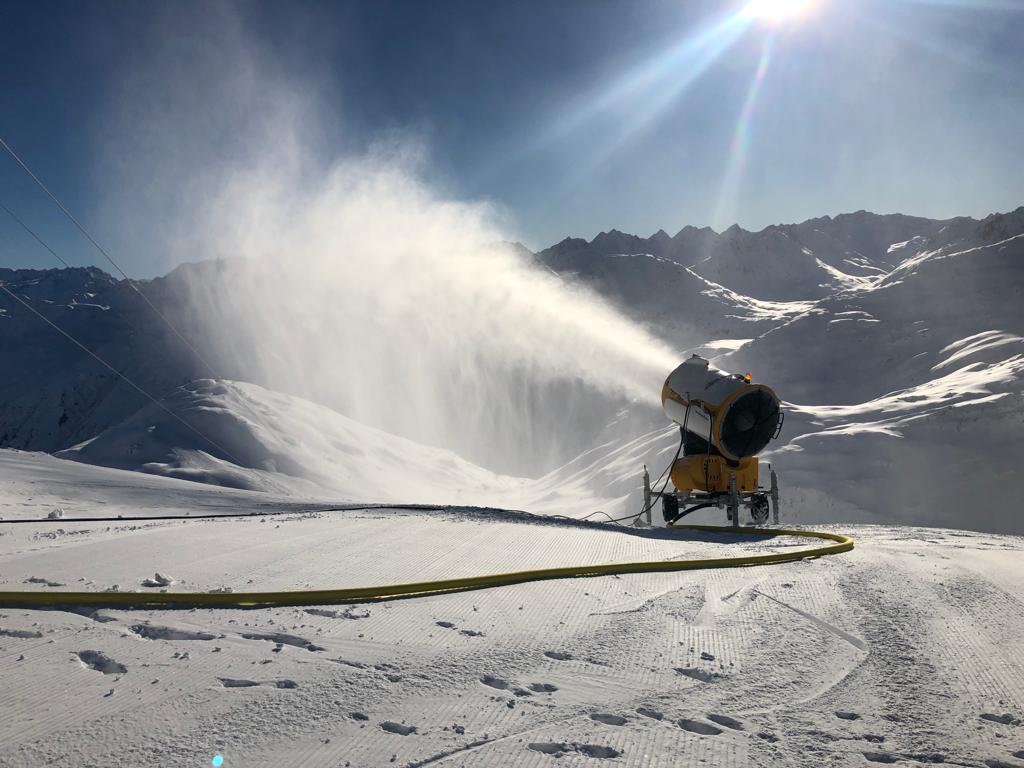 How much power do snow-making machines consume? Are they all the same?

Meyer: No. A snow lance requires relatively little electricity, because you only have to generate compressed air for the most part. Around 0.2 to 4 kilowatts depending on the system and model. Propeller-driven snow cannons consume more power, about 18 kilowatts per machine. But the amount of electricity used to make snow also depends on the topography, i.e. where the equipment is located.

Meyer: The cheapest and most economical way to make snow is to use the pressure of natural waterways, i.e. to use water directly from a stream at the top of the mountain. This is the case, for example, for the Gurschen section on Gemsstock. On the other side, on Nätschen, we take water from the Oberalpsee. The amount of water we can take from the stream depends highly on the conditions in autumn, i.e. on how much it rained. Generally speaking, the colder it gets, the more difficult it becomes, as there is less water available. Obviously, legal requirements dictate how much water we can take from a lake or stream, but we have never reached these limits. 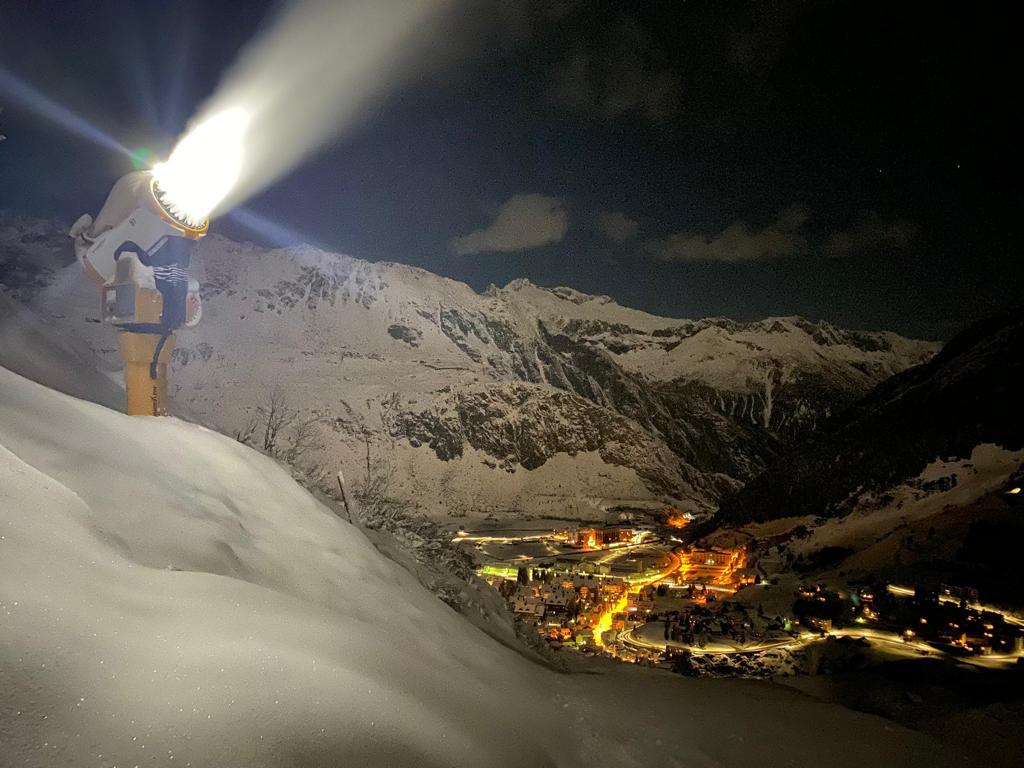 How much artificial snow is produced in the SkiArena?

Meyer: That depends on how much natural snow is already available and how dry the air is. Especially when it snows early in winter, we often make snow because it binds well with the natural snow.

Do you make as much snow as possible?

Meyer: No. On the shady side, we make snow in the autumn and then until December, in rare cases until January. What we do is add artificial snow to the natural snow, so that there is enough to last until spring. However, we try to work with as little artificial snow as possible. From experience we know pretty precisely where we need to produce snow and how much we need. Plus, we have the previous year’s figures about how much water we used per slope, which gives us more to go on.

How else can you save energy when making snow?

Meyer: In future, we plan to invest in GPS-based systems for snow groomers that measure the amount of snow and indicate how much snow is available and where. The advantage is that the artificial snow can then be distributed in a much more targeted manner. That will enable us to reduce the quantity of artificial snow by up to 20%. We are currently testing it on two machines on Gemsstock and in Sedrun.

What about the snow groomers? They also need a lot of fuel...

Meyer: Snow groomers have come a long way as well; there are hybrid vehicles that consume up to 20% less diesel. But it also depends a lot on the driver: With a more ecological driving style, you can achieve considerable savings in terms of fuel consumption. 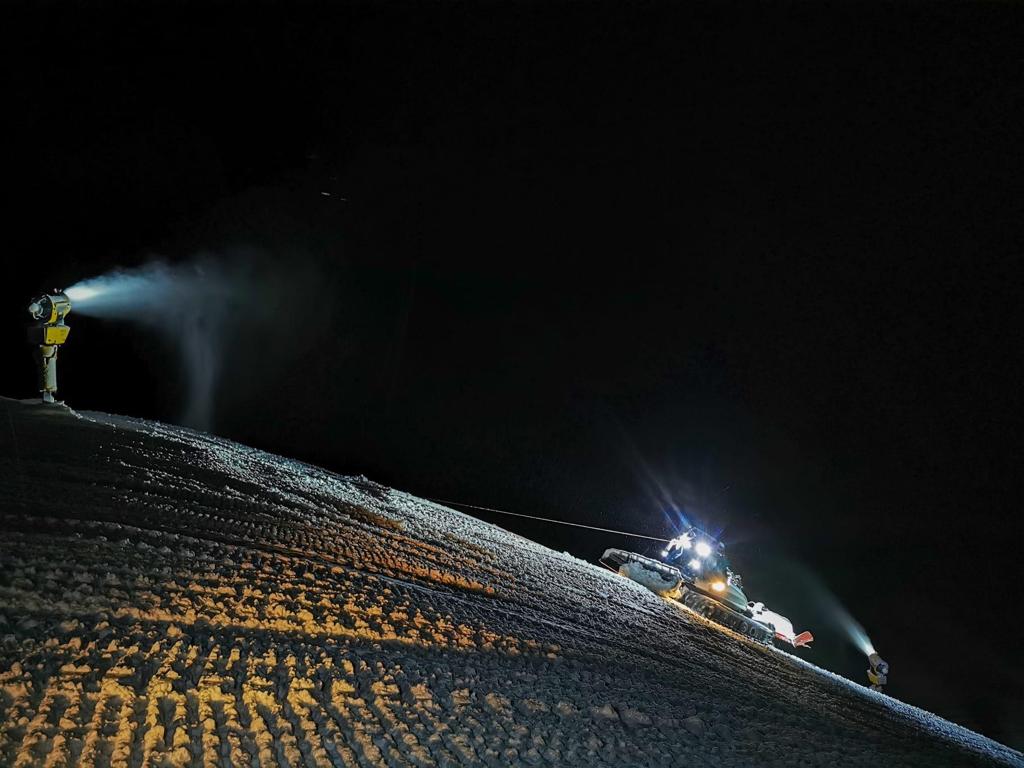 How are you witnessing climate change on the mountain

Meyer: The windows of opportunity for snow-making have become smaller. It’s seldom cold for long periods, and it is gradually getting warmer. You have to be ready to go into action more quickly. At the same time, the expectations of winter sports enthusiasts have risen enormously in the last 10 to 15 years. Today, people want to ski in November. This is a major contradiction.

To what extent are flora and fauna affected by artificial snow?

Meyer: When we linked the ski areas, we performed analyses to ensure that no water is pumped up the mountain from a lake whose chemical composition is different from the water on site. In particular, the composition of the minerals is important. The use of artificial snow means that we cause less mechanical damage to the flora and fauna.

And what has the result of this been?

Meyer: The water is the same, and we don’t disturb the water cycle with it: water is pumped up the mountain, is turned into snow, and in the spring flows back into the lake as meltwater. Obviously, artificial snow on a piste takes longer to melt, but a piste covered in natural snow also takes longer to melt than snow in unspoiled nature.

Dani Meyer was born and raised in Andermatt. He trained as an agricultural machinery mechanic. In 2009 he started working as a mechanic for the cableways in Andermatt. Today, Meyer is deputy head of the piste rescue service and is responsible for its technical areas, such as vehicle maintenance, snow-making and piste preparation.