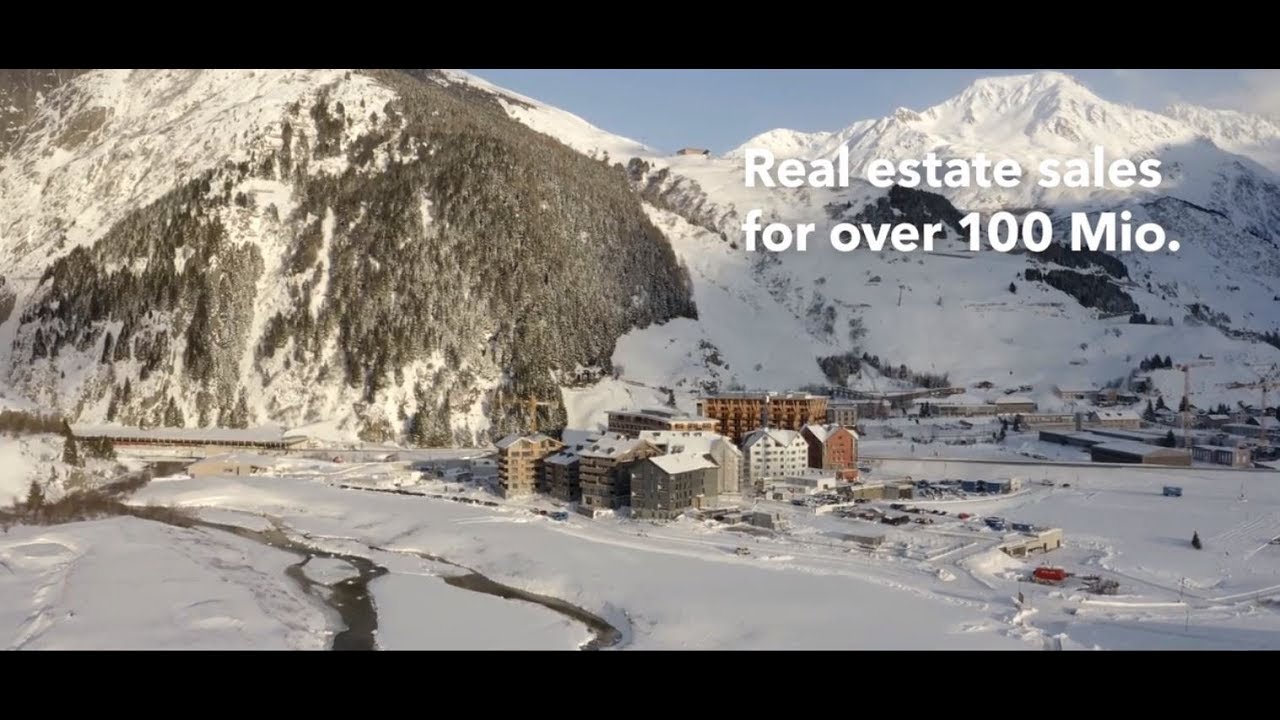 Andermatt Swiss Alps AG can look back on an eventful 2018 financial year. The company once again mastered an enormous construction volume. CEO Franz-Xaver Simmen: "We opened the Radisson Blu Hotel with 179 rooms, the Gotthard Residences with 110 apartments and Apartment House Alpenrose. Shops, restaurants and the indoor pool have been completed around the newly designed "Piazza Gottardo."

Real estate sales rose to a record level of CHF 110.2 million in 2018. Demand for real estate increased significantly within the space of a year, which is attributable in particular to the completion of the Andermatt-Sedrun ski area merger, modern hotels and holiday apartments, as well as the highquality offerings such as golf, wellness and shopping. "Andermatt is back on the tourist map," continues Franz-Xaver Simmen. At the end of fiscal year 2018, around 80 percent of all apartments in the completed and occupied apartment buildings had been sold. The holiday apartments available for rent throughout the year were occupied at an average rate of 53 percent.

Sales of CHF 135.7 million (previous year CHF 72.6 million) were achieved in financial year 2018. The financial year ended with a budgeted deficit of CHF 40.7 million (previous year CHF 29.8 million), which is attributable in particular to the high construction costs and depreciation (hotel construction, expansion of the SkiArena and the concert hall). A total of CHF 1.05 billion was invested from the start of the project through 2018, CHF 150 million of that in 2018.

A large construction volume was mastered once again in SkiArena Andermatt-Sedrun, including the completion of the new Oberalppass-Schneehüenerstock gondola cableway (SchneehüenerstockExpress) with a restaurant in a prime location: "This means the destinations of Andermatt and Sedrun now have one of the most modern and convenient ski resorts, which has been completed within record time with an investment of CHF 140 million," says Franz-Xaver Simmen.

Andermatt Swiss Alps and the associated companies The Chedi Andermatt, Radisson Blu and SkiArena employed over 900 people at the end of 2018, chiefly in the cantons Uri (Andermatt and Altdorf) and Grisons (Sedrun). This equates to 817 full-time positions.

The five-star deluxe hotel The Chedi Andermatt was open for eleven months of 2018, including during the low-frequency off-season. It achieved an average annual occupancy rate of a stable 54 percent for 2018. Compared with the previous year, sales rose by 17 percent to CHF 26.2 million (previous year: CHF 22.4 million). The number of guests rose by 11 per cent to just under 43,000.

At the end of 2018, Andermatt received urgently needed additional bed capacity along with convention infrastructure in the form of the Radisson Blu Hotel. This hotel was classified as a 4-Star Superior Hotel on 17 December 2018 and officially opened on December 20. The Radisson Blu Reussen is a franchise of the international Radisson Hotel Group, which operates over 1,100 hotels worldwide.

The hotel has 179 rooms as well as 110 suites and apartments in the Gotthard Residences. The units range in size from one, two or three bedrooms. With the 25-metre-long indoor pool with separate children's play pool, Andermatt now has an indoor swimming pool facility that is available to schools and the local population. Spa, wellness and fitness facilities are also available.

Following the early season start on the Gemsstock in November 2018, the new "SchneehüenerstockExpress" gondola cableway was opened on 22 December 2018 as the key link in the AndermattSedrun connection from Oberalppass. Inaugurated at the same time was the new panorama restaurant Schneehüenerstock on the summit of the same name. In addition to the Schneehüenerstock-Express, snow-making systems, the Oberalpsee pumping station and the piste from Schneehüenerstock to Oberalppass were also completed in 2018.

In addition to the Schneehüenerstock panorama restaurant, Mountain Food, the SkiArena's gastronomy brand, also opened the Hotel Bergidyll, The Swiss House and the new Restaurant Biselli. As part of the cooperation with the organisation Protect Our Winters Switzerland (POW), plastic is largely dispensed with in the ski resort (no PET bottles).

The concept of dynamic pricing with prices starting at 39 francs was continued and further improved during the 2018/19 season. The share of online sales increased to 16 percent. The special offer of skiing for 10 francs on 10 Wednesdays as a trial day (especially for families) proved a great success. On fine days, up to 12,000 guests were enjoying the ski resort.

With the opening of the Andermatt-Sedrun ski link and the commissioning of the Sedrun-Cuolm da Vi areal gondola on 6 April 2019, the vision of an Andermatt-Sedrun-Disentis ski resort has become reality. Full-year passes for this ski resort for the 2019/20 season can be purchased today at a discount of up to 22 percent. This early-bird discount for these passes, which are valid immediately, remains available through May 2019.

The Andermatt destination will be further expanded in 2019. Two new apartment buildings are under construction and four more are in planning in order to meet the growing demand for the holiday properties. On 16 June 2019, the new Andermatt Concert Hall with up to 700 seats will be inaugurated with a concert by the Berlin Philharmonic Orchestra. Andermatt will thus have a unique platform for concerts and conventions at the highest level. The Andermatt Swiss Alps managers are also working intensively on the planning of the next hotel, a family hotel in the four-star superior category.

The current CEO, Franz-Xaver Simmen, will leave the company at the end of April, as previously announced. Until a successor CEO is appointed, Andermatt Swiss Alps AG will be directed by Khaled Bichara, CEO of Orascom Development AG, on an interim basis.