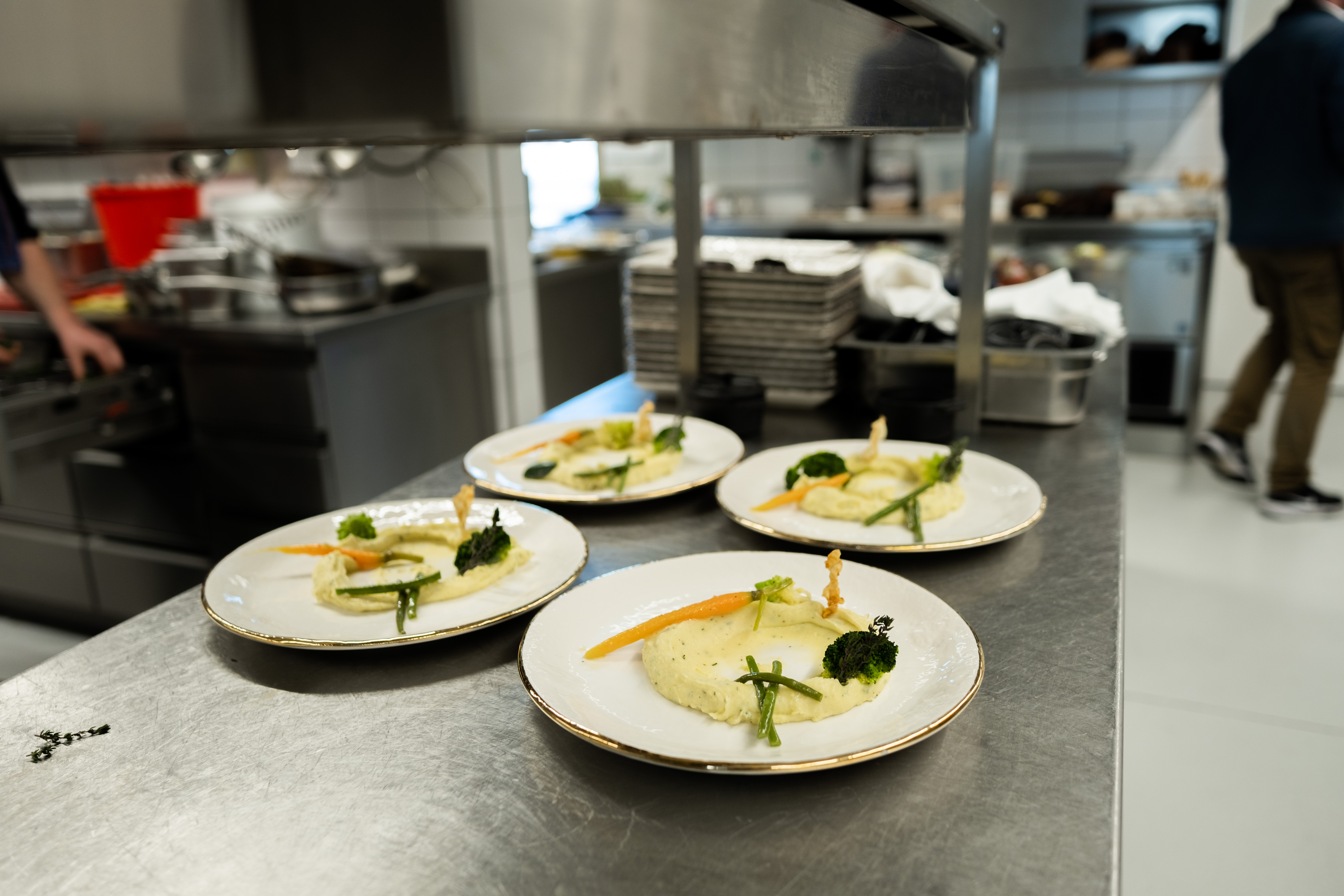 At the restaurants of Andermatt-Sedrun Sport AG (ASS), the emphasis is on regional ingredients, fresh products and generating as little waste as possible. In order to find out how much food is actually being wasted and how that can be prevented, the company and the association United Against Waste spent a month analysing and weighing food waste. The gourmet restaurant Gütsch by Markus Neff also took part in the project. The measurements returned very positive results for all restaurants. Very little food is wasted, and most of the waste is not attributable to the kitchens.

In February and March, food waste at three ASS restaurants and at the restaurant Gütsch by Markus Neff was analysed over a period of four weeks: What is being thrown away? How did the waste come about? Was too much food being made? Were the portions too large? Is the food not being made with sufficient care? Through a time-consuming process, all food waste was categorised and weighed and then recorded using an app before being disposed of in organic waste bins. ASS chose establishments that cover a broad spectrum: a full-service restaurant in the village, a full-service restaurant on the mountain, and a self-service restaurant. All three establishments do brisk business but differ in terms of service and clientele.

Matti, a full-service family restaurant, is located directly at the mid-station of the Gütsch Express gondola and near the Nätschen railway station. It offers a wide selection of family- and child-friendly dishes. Guests can also linger over coffee and fresh cake on its large sun terrace.

Most of the food waste at Matti – 86.43 kilograms, or 82.59 percent – was plate waste, i.e. uneaten edible items that remain on guests’ plates. Only about 17.4 percent of the food waste was attributable to the kitchen. Products in the bread and baked goods category made up a relatively high amount of the waste – 9.55 kilograms, or 9.13 percent. But on a per-guest level, the amount of plate waste was very small – 10.52 grams per person, equivalent to the weight of a small cherry tomato.

The self-service restaurant Schneehüenerstock is located at the mountain station of the gondola and chairlift and attracts guests from the Grisons and Uri sides of the ski area with its large terrace. In addition to several daily specials, the restaurant offers vegetarian and vegan dishes as well as a selection of salads, cakes and desserts.

Also at Schneehüenerstock, most of the food waste was plate waste – 85 kilograms (55.51 percent) over the four-week measurement period. Only about 44.5 percent of the food waste was attributable to the kitchen. Other larger amounts of waste were in the categories fruit and vegetables (38.80 kilograms, or 25.34 percent), meat, fish, poultry and tofu (16.89 kilograms, or 11.03 percent) and starchy side dishes (12.43 kilograms, or 8.12 percent). Here as well, the amount of plate waste on a per-guest level was very small – just 8.12 grams per person.

The Swiss House restaurant is located in the clubhouse of the Andermatt Swiss Alps golf course. In the winter, it is situated right next to the cross-country ski trail. The restaurant features a large sun terrace, and in addition to regional dishes, it serves fresh salads and sandwiches, hot soups and snacks, and a lunch menu that changes daily.

The Swiss House weighed only plate waste and bread and baked goods, rather than all food waste. In addition, the measurement phase was only 24 days instead of 28. The results are therefore not directly comparable with the other restaurants. The 1,759 portions generated a total of 25.15 kilograms of food waste, or 14.32 grams per guest. Slightly more than half of this was plate waste.

The food waste at Gütsch by Markus Neff was fairly evenly distributed across various categories. The kitchen accounted for 76.67 percent of the food waste. Plate waste was 4.2 kilograms (23.3 percent), only slightly more than the next smallest category – starchy side dishes at 3.4 kilograms (18.89 percent). Total food waste per guest was 14.39 grams.

Bottom line and next steps

The measurements show that extremely low amounts of food need to be disposed of at the ASS restaurants and the restaurant Gütsch by Markus Neff. Moreover, waste often occurs as a result of unforeseeable events. The restaurants on the mountain are dependent on lift operations. If the lifts remain closed for several days due to strong winds or bad weather, some food that was produced in advance is no longer permitted to be used for reasons of food safety. While this circumstance is unavoidable, it is possible to reduce its impact with skilful production and inventory management.

The restaurants want to collectively do something to prevent plate waste. At the same time, the aim is to raise the awareness of guests and employees about the issue. In order to further promote the thrifty handling of food, the kitchen teams at all ASS restaurants are trained at the start of the season to be conscious of economical practices. In addition, measurements are made at regular intervals in order to identify any changes or improvements.