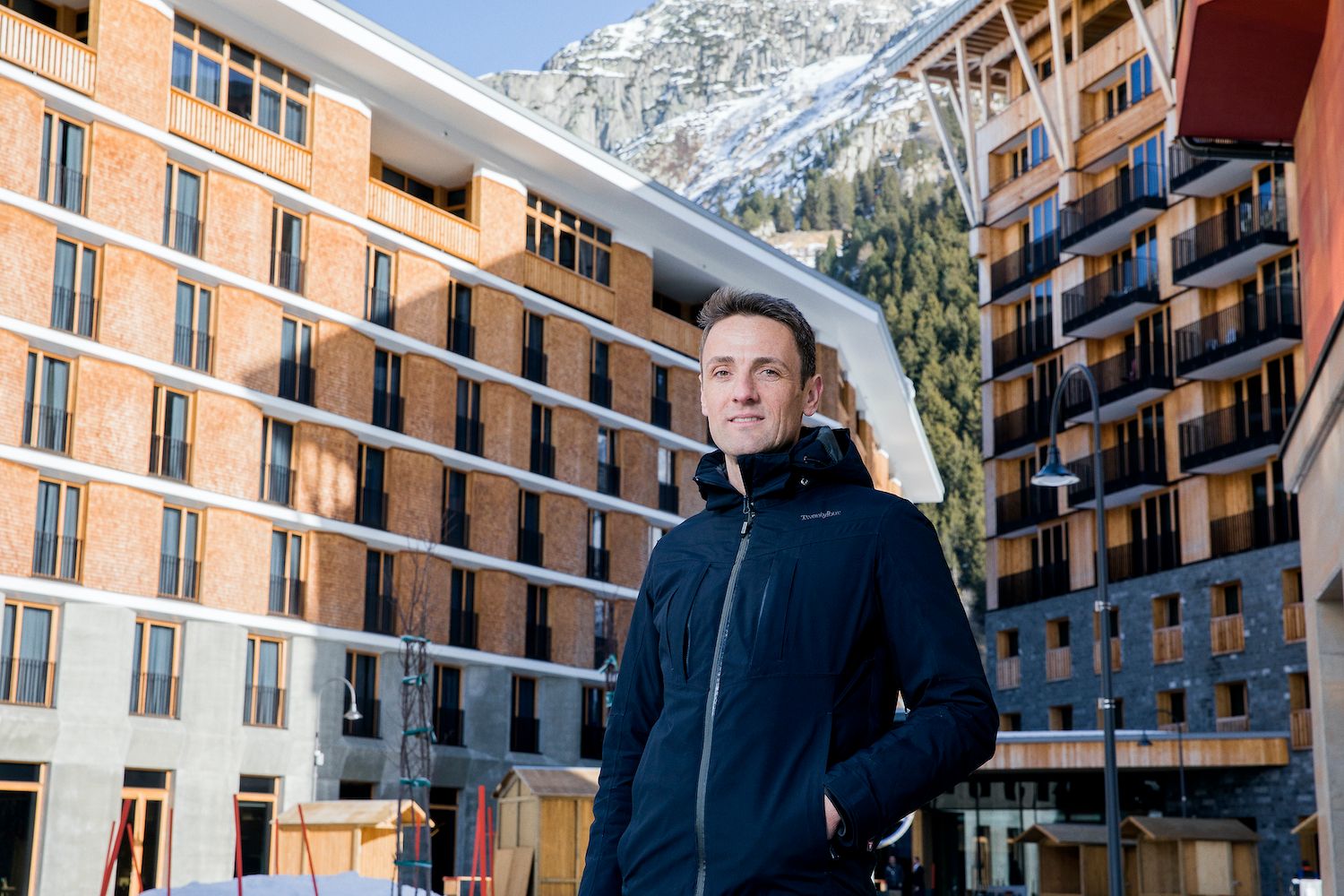 Pro­tect­ing the cli­mate with build­ings? En­gi­neer Christoph Lan­gen­berg ex­plains how

Buildings should be sustainable and conserve resources – especially in the mountains. Christoph Langenberg, Head of Planning and Development at Andermatt Swiss Alps, explains how the village quarter of Andermatt Reuss is contributing to climate protection.

Christoph Langenberg is an engineer by nature. The athletic man in the black functional jacket has problems with the term “sustainability in construction”. Not because he considers sustainability unimportant. On the contrary.

However: “The term is often misused,” he remarks. “These days, everything seems to be ‘sustainable’, but what exactly does that mean?” Langenberg prefers to show that what he does and supervises as Head of Planning and Development at Andermatt Swiss Alps leaves the smallest possible ecological footprint. 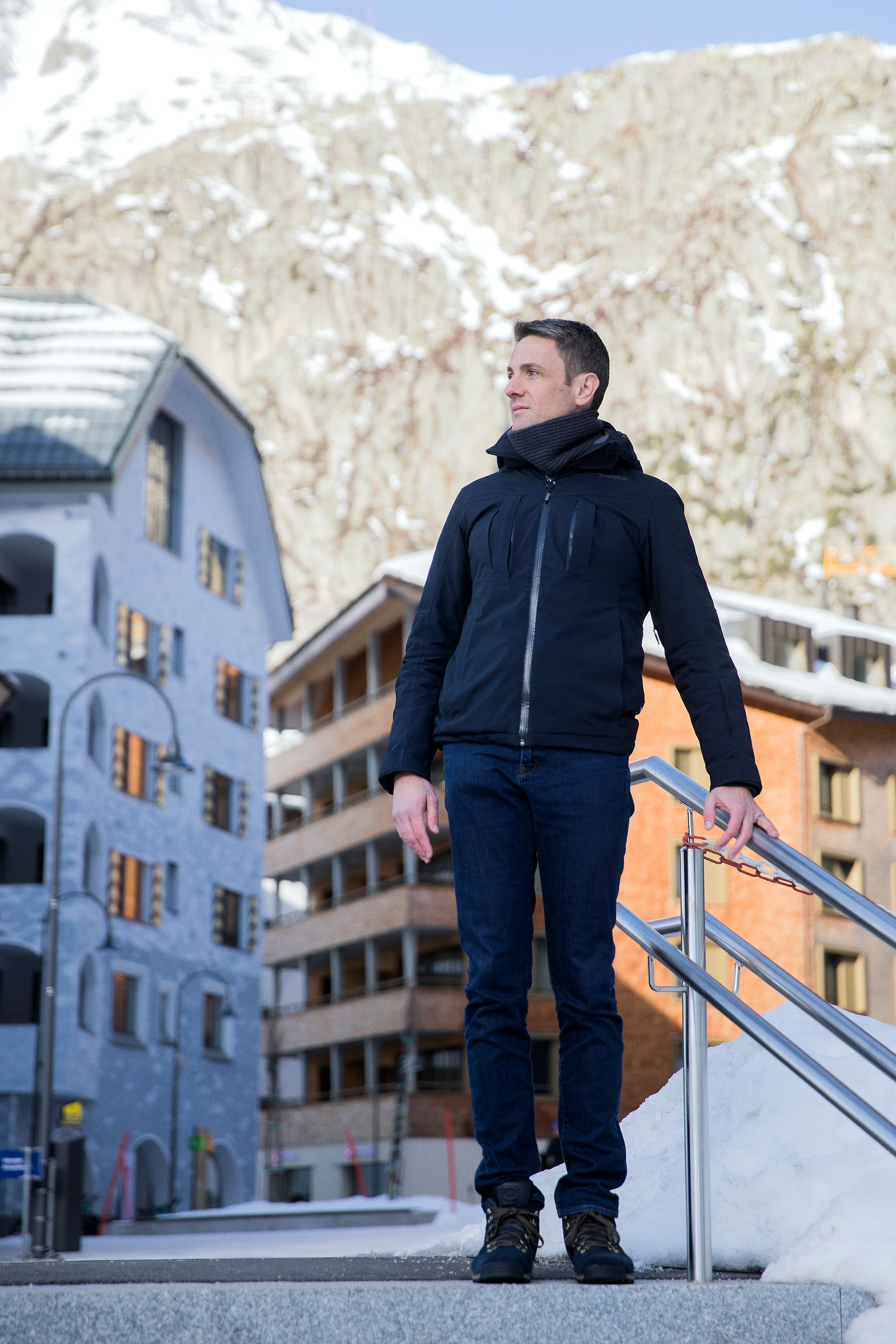 The term sustainability is often misused.

He has been working for the tourism company in the Ursern Valley since 2007 and knows the project, the properties and facilities inside and out. He is probably more familiar with them than anyone: Langenberg therefore also knows fairly precisely where the project meets “sustainability” criteria.

Sustainable thanks to local economy

“Being responsible for the planning and development of the Andermatt Swiss Alps buildings, my philosophy is to do whatever is possible and makes sense,” says Langenberg. In his opinion, it is important to consider the local economy and companies from the region first when building.

Not only because these companies don’t have as far to travel and can thus save CO2 emissions, but also because they know what works at this altitude and in the prevailing climatic conditions. In addition, these companies are committed to the quality and durability of their materials: “For me, this is effective sustainability,” explains Langenberg.

The supply chain must be verifiable

Langenberg knows exactly which materials from the region were used in which parts of the village quarter. Furthermore, with certain building materials, he deliberately does not use suppliers from countries like China, for example, because he cannot verify their supply chain.

In addition, he not only knows the reports on environmental construction monitoring that were prepared for Andermatt Swiss Alps, but also the details of heat recovery in each of the apartment buildings. Langenberg is convinced: “This makes us credible.” 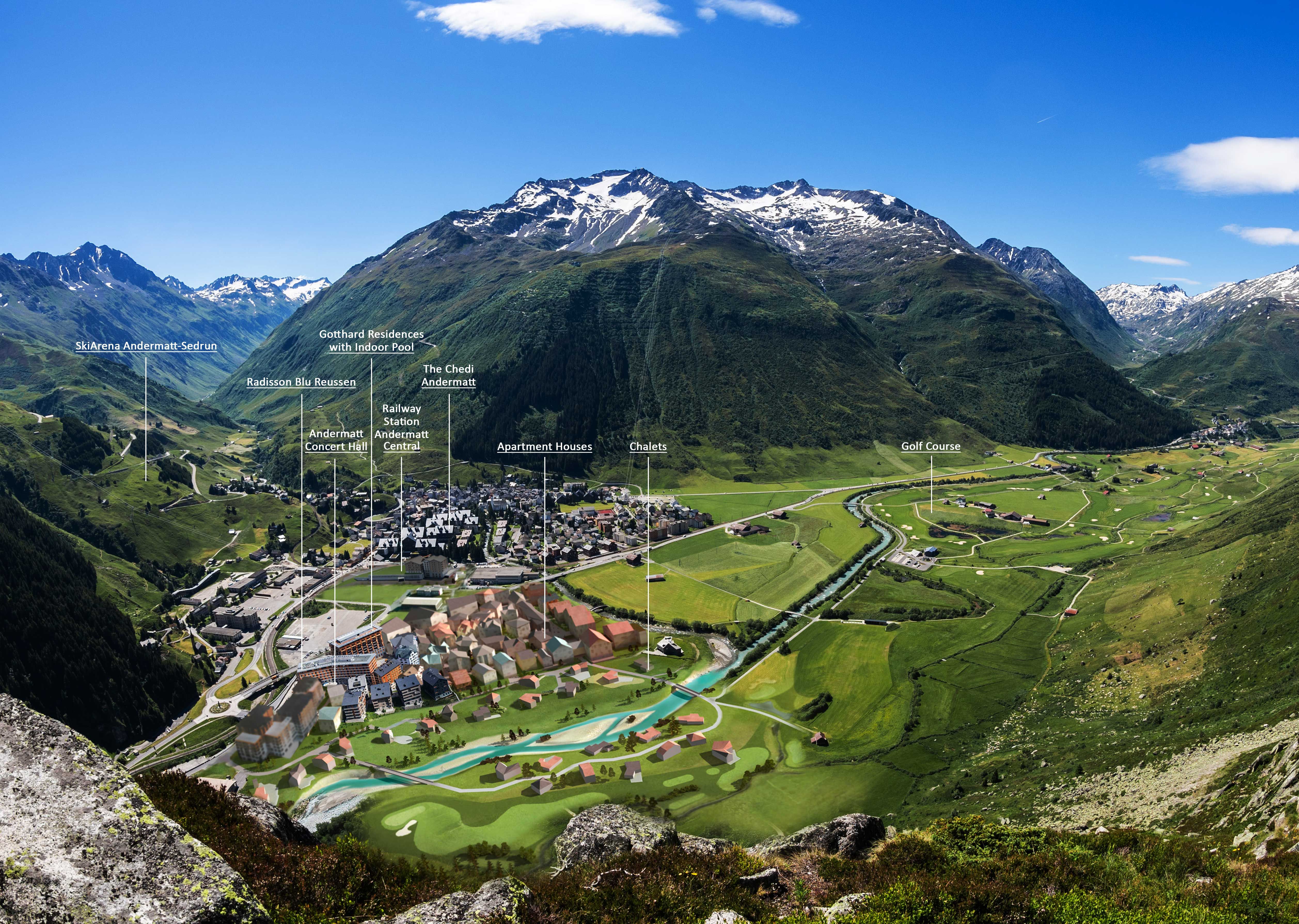 Langenberg wouldn’t be the practitioner and reviewer he is – i.e. the engineer who ensures that everything meets the relevant criteria – if he didn’t use data for argumentation and comparison purposes: “The Andermatt Swiss Alps resort is built very densely,” he says.

What is already practised in many towns and cities also applies to Andermatt Reuss at an altitude of 1,400 metres above sea level: fewer houses, but more volume per building. The idea behind this is that larger volumes not only consume less energy, but also use less land. 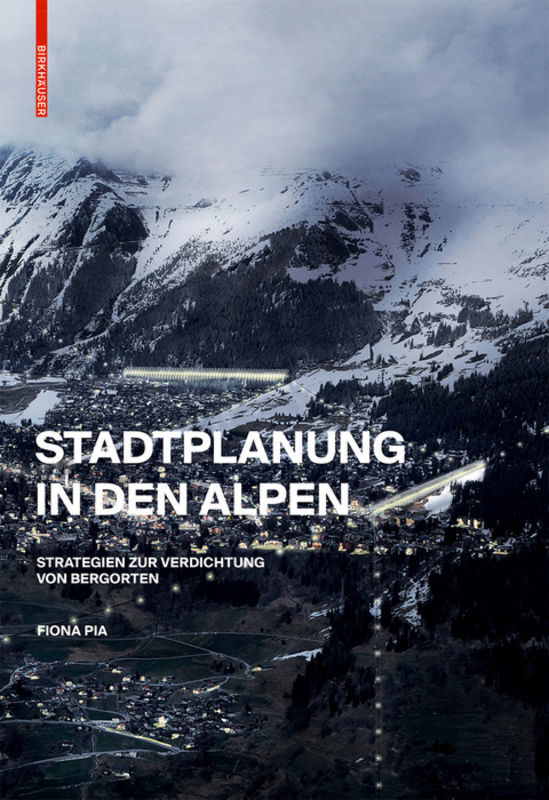 [...] the complex project of Andermatt Swiss Alps, which has been described by the media as ‘gigantic’ or ‘pharaonic’, is not only the most rational model, but also the one that causes the least damage to nature.

This is also why plans call for only a few chalets in the village quarter of Andermatt Reuss. “Apart from the 42 residential buildings with a total of around 500 apartments, only 28 chalets are being built, which is merely 4% of the total usable area of the new village quarter,” he explains.

In other alpine developments, however, free-standing chalets take up the majority of the area. In Verbier, for example, there are now around 2,000 chalets, which occupy over 60% of the total usable area.

Andermatt: the most rational model

These figures originate from a study on spatial planning in the Alps. According to the book entitled “Urban Planning in the Alps”, the complex project of Andermatt Swiss Alps, which is sometimes described as “gigantic” or “pharaonic”, is not only the most rational model compared with others, but also the one “that causes the least damage to nature”.

This makes Langenberg a bit proud. But of course he also knows that what has been, and is still being, created in Andermatt cannot be taken for granted: “It was certainly not an easy decision for the Egyptian tourism entrepreneur Samih Sawiris to submit unconditionally to all construction regulations and planning restrictions. But ecological concerns are very important to him,” Langenberg knows.

Langenberg is convinced that the strict layout plan that the government of Uri has imposed on the project will ultimately work to Andermatt’s benefit. There will never be a large chalet village with asphalted access roads here. Christoph Langenberg would swear an oath to this on behalf of his boss Samih Sawiris.

In her book “Urban Planning in the Alps: Strategies for Densification of Mountain Towns”, architect Fiona Pia of EPFL looks at how various mountain villages are handling development. She compares the village structures of Andermatt, Avoriaz, Verbier, Zermatt, and Whistler-Blackcomb in Canada. The graphic analyses make the differences very apparent. Pia formulates strategies for urban densification and mobility that can be applied to other tourism regions. The 189-page book was published by Birkhäuser Verlag in January 2019.