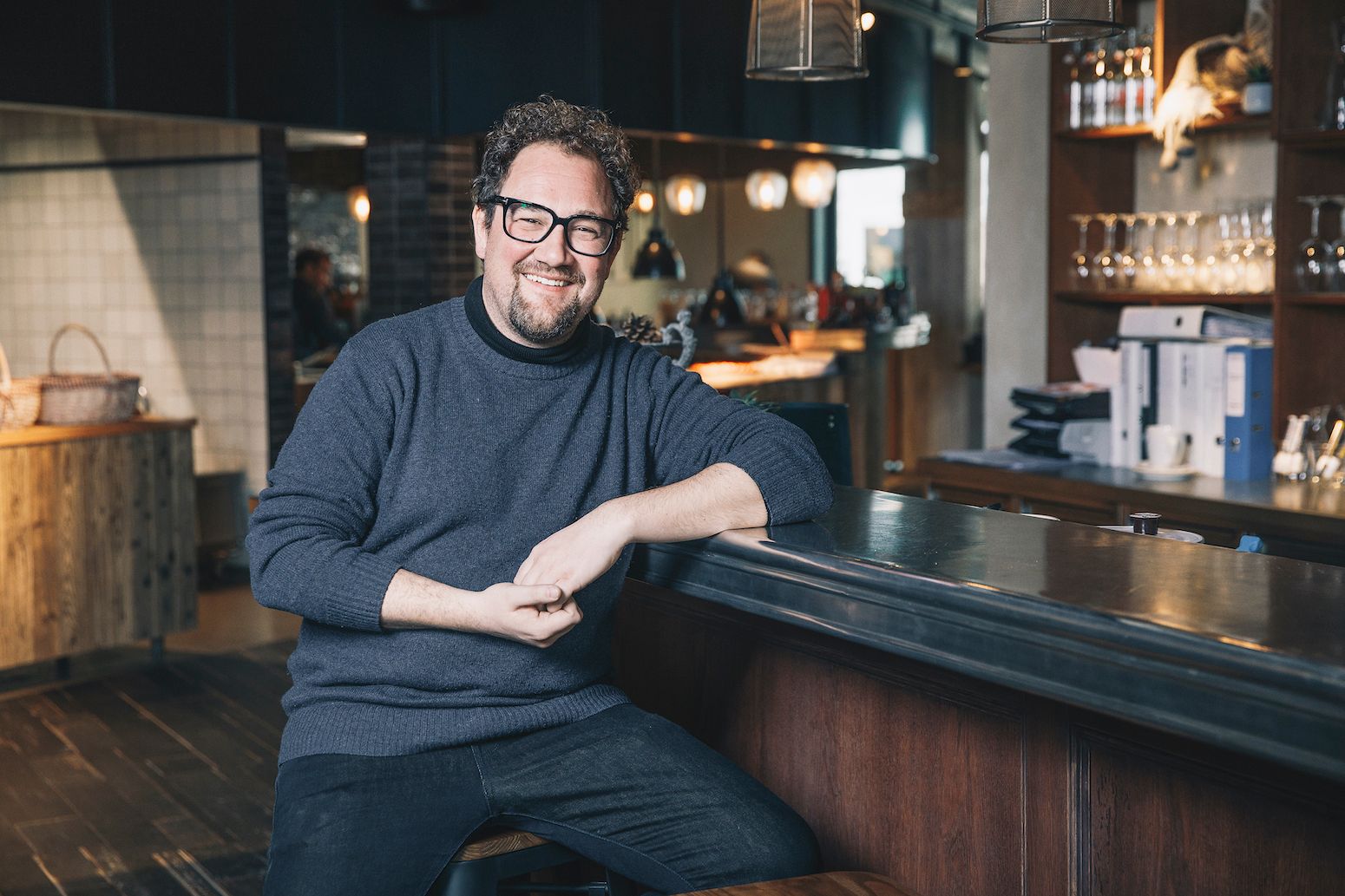 Water from the mountain instead of out of PET bottles, pasta “fatta in casa” instead of ready-made fondue: The Zurich restaurateur Marco Però has been rejigging Andermatt’s mountain catering under the label Mountain Food. And now he also wants to offer more vegetarian alternatives.

Marco Però leans over a production table in Andermatt’s Restaurant Biselli, where a confectioner is portioning house-made panna cotta into dessert glasses. “Until recently, we bought frozen panna cotta in the lowlands and had to haul the waste back down from the mountain restaurants,” explains Però, the curly-haired restaurateur dressed in a black turtleneck sweater, as he twirls one of the glasses in his hand. “Now we save on plastic – and the guest eats an even better dessert.”

For the past three years, Però has headed the now 16 catering operations of Andermatt Swiss Alps. And in the process, he has started a minor revolution with the Mountain Food label.

The catering group keeps plastic off the mountains and focuses on house-made and regional food instead of convenience. “The best part is that this also pays off,” says catering pro Però.

Out of the blue

The job in the mountains materialised for the 40-year-old “out of the blue”, as he puts it. Although Però grew up in the foothill town of Toggenburg, he became a city boy following an apprenticeship at the Dolder Grand Hotel just outside of Zurich.

As the right hand of the trendy Zurich restaurateur Michel Péclard, Però began designing and running restaurants in his early 20s, including setting up the now legendary Pastakeller in the basement of a tram station. In 2010 he went into business on his own and built himself a small catering empire, with holdings in nearly a dozen Zurich restaurants.

In 2017 Però received an enquiry from Samih Sawiris. The investor was looking for renowned restaurateurs to take over individual operations at the rapidly grown Alpine resort. Però wrote a letter in response: Only overall management, he argued, can give the Alpine resort a culinary identity – and at the same time meet its commitment to sustainability.

Sawiris put Però on the Board of Directors of Andermatt Swiss Alps, but after having a look at Andermatt, it became clear to Però: If he wanted to realise his vision, he would have to take over operational management. “This kind of opportunity doesn’t come around twice,” says Però. He sold all but one of his Zurich holdings and rented an apartment in the Uri mountain village 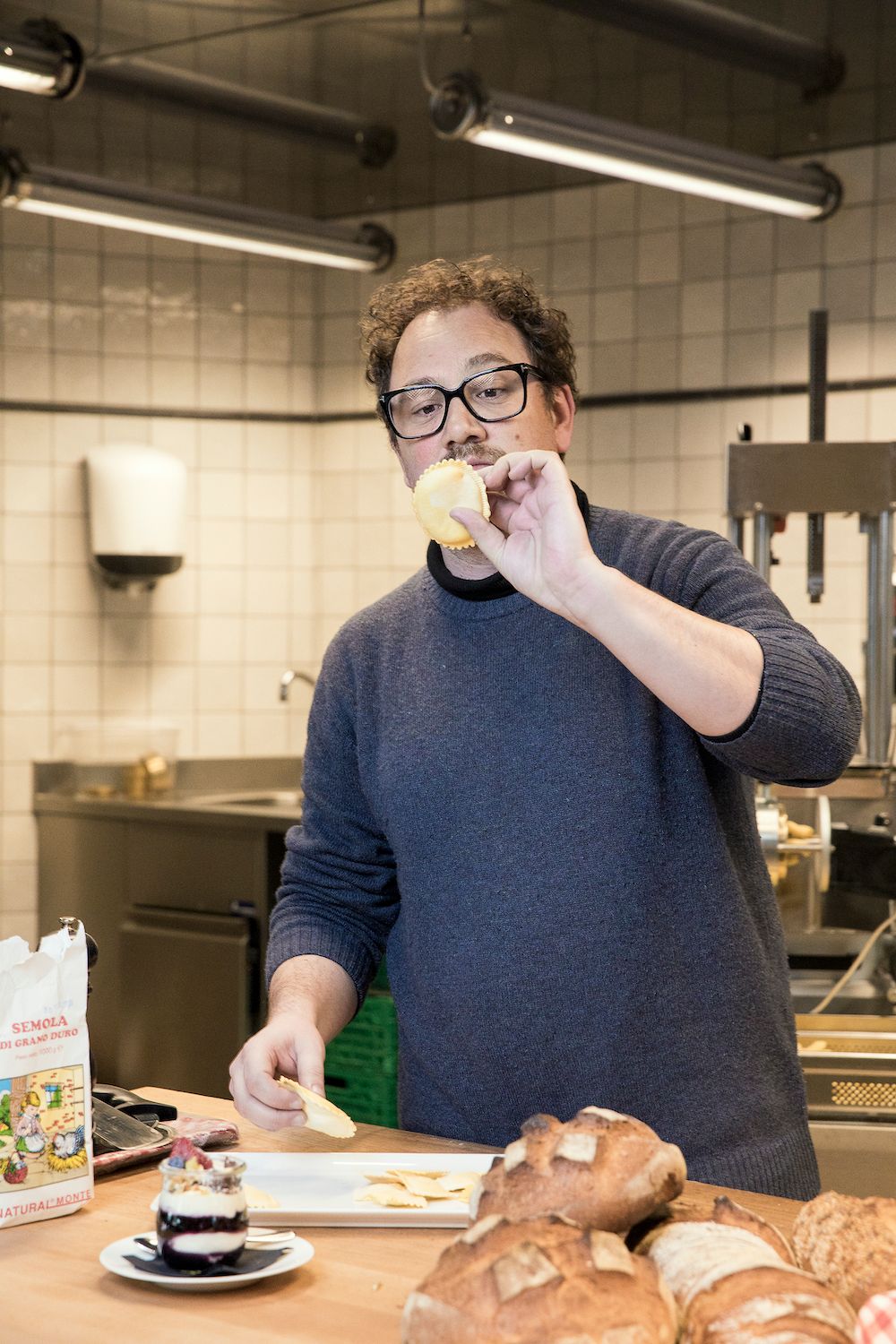 Però, who knew mountain restaurants simply as a skier, quickly realised how decisive the waste factor was. “In the city, you just toss it in the nearest garbage bin,” he says. “Up here, it has to be hauled by snowcat to the gondola and then brought down to the valley.”

No more plastic on the mountains

Some trash creates other problems: Small plastic items, like ketchup packets, stirring sticks, and PET bottles, get picked up by the wind off the mountain restaurants terraces and blown into the snow. “Four rivers originate near Andermatt,” says Però. “They flush the plastic through the whole of Europe and then into the sea.” Therefore, his first objective was: No more plastic on the mountains.

Guests at the Mountain Food restaurants now ladle ketchup and mayonnaise for their chips from bowls and stir their coffee with a real spoon. Moreover, Però began using nearby mountain water to replace mineral water sold in PET bottles: Guests now are given enamel cups to fill with water from dispensers at no charge.

“Some people were worried that this would cut into our sales revenue,” he recalls. “But guests now spend more money on food or stop in just because they don’t have to pay to get something to drink.”

Each year, 100,000 litres are dispensed from the water fountains, meaning the Però saved the use of 60,000 PET bottles. But Però underestimated another consequence of the PET ban. Since Sprite and Coke are now brought up the mountain in heavy glass bottles, transport has become more difficult.

For disposal, Però found an efficient solution: Instead of transporting them back with snowcats, the empty bottles are now stored in the piste pubs and brought down by lorries after the snow melts.

Fondue from the village cheese dairy

In his second season in 2018, Però continued his battle against waste using culinary means: Fresh Alpine cheese instead of ready-made fondue was now the name of the game. And the new fondue mixture comes directly from the village cheese dairy.

In order to save on additional transport distances to and from the lowlands, Però planned from the outset to incorporate a confectionery and a pasta-making facility at Biselli, the restaurant in the village centre of the Alpine resort. This is used to supply more remote Mountain Food operations with desserts and pasta. But because of lack of capacity, suppliers can’t be dispensed with entirely: A Zurich supplier makes the 1.9 tonnes of Bolognese sauce and the 1.7 tonnes of Napoli sauce that are needed each season.

Beef stew and macaroni for vegetarians

In 2020 Mountain Food will add another dimension: health. “During their ski holidays, people want to indulge a bit,” knows Però. “Nevertheless, we now want to offer more types of lighter fare in addition to sausages and hash browns: more salad, more falafel.”

In order to account for new eating habits, Però had already made sure that mountain huts also offer veggie burgers. Now he wants to expand the offering. “With the latest meat-replacement products, vegetarian-style beef stew with macaroni tastes almost like the real one,” says Però with an enterprising smile.

Scepticism among mountain dwellers has melted

Falafel at mountain huts: Però will not be deterred in Andermatt with this idea, either. In any case, the initial scepticism that the mountain dwellers showed toward the lowlander, who just seems to do things differently, has now melted away like the snow after the end of the season.

In the foyer of Biselli, which Però has furnished with dark wood, giving it a modern yet cosy ambience, the mountain catering revolutionary chats amiably with Andermatters over coffee. And as he tromps out into the snow in his thick Mountain Food winter jacket on his way to the next meeting, even he looks a bit like a mountain dweller.